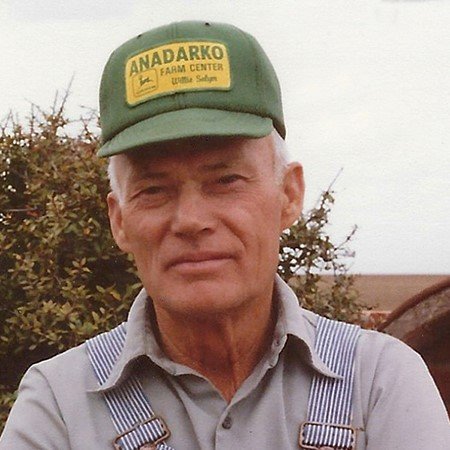 Bert Barnett of Grandfield, passed away peacefully at 100 years of age on Feb. 20, 2022, at the Lawton/Fort Sill Veterans Center.

Bert was born on the family farm north of Loveland on Jan. 30, 1922, to Denver and Lena Barnett. He graduated from Loveland High School in 1940, and traveled to Wichita, Kansas, where he worked at Boeing Aircraft for two years. While aiding in the production of the B-17 aircraft, Bert’s lifelong love of planes and flying was kindled. In 1942, he joined the Army Air Corp, where he dedicated himself to the training of air crews for the operation of the B-29 aircraft.

Bert was united in marriage to Gussie M. Blasdel at her parents’ home near Loveland on July 29, 1950.

Bert was a reserved, intelligent man with an adventurous side. He jumped at the opportunity to take family and friends for plane rides; and bought a boat for water skiing trips with his family. He and Gussie had several RVs, and loved taking trips to Branson, Missouri.

In his 80’s, he learned to use a computer, showing he was capable and young at heart!  He was smarter and faster at counting dominoes than anyone around, well into his 90’s. By 100, he had mastered one of his favorite sayings, “Take it one day at a time” and had made new friends among residents and staff at the VA Center who loved him. He was always pleasant, always learning.

Bert had a lifelong passion for flying and owned several aircraft through the years; two of which were used for aerial spraying.  He sold his last plane when he was 88. He was involved in farming and ranching most of his adult life, and was a dedicated husband to his beloved wife, Gussie.

Bert was an optimist and possessed a great sense of humor.  While in the VA Center, he commented, while smiling, “You know you’re going backwards when you trade a plane in your backyard for a scooter!”

He was preceded in death by his father, Denver Barnett, his mother, Lena Barnett, two brothers, Bennie and Vinton, and a sister, Ruth Mackall. His bride of sixty years passed away Dec. 5, 2010.

Bert will be missed by many.  The family wishes to thank the staff at the Lawton/Fort Sill Veterans Center for their love of Bert and compassionate care.

A private family Celebration of Life will be held at a later date.