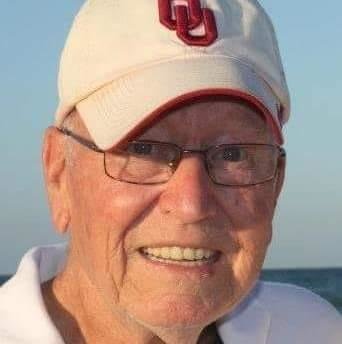 Private inurnment will be in the Frederick Memorial Cemetery under the direction of Orr Gray Gish Funeral Home.

He was born May 20, 1936, near Altus, Oklahoma, to Marvin and Josephine Hals Bennight. Boyd married the love of his life Barbara Ann Ritchie on September 6, 1958, at Tipton, Oklahoma. They recently celebrated their 64th anniversary. To this union there were four children. First and foremost, he was most proud of his family and was often heard bragging, “We have a great family.” After graduating from Friendship High School, he played American Legion Baseball and always loved the game. He honorably served in the National Guard. He worked at Ford dealerships for 33 years. He had a love and passion for Fords and fast cars. He told his kids and grandkids if they wanted him to work on their vehicles, it better be a Ford. He shared his love for drag racing with his son James and they raced cars for many years until he was involved in an accident at the race track in 1994. After a long recovery, he later opened Bennight Auto Sales in Frederick. Through the years, he has restored many vintage automobiles including Mustangs and Thunderbirds. He was most happy when all of his children and grandchildren were together in his home visiting. He was a Baptist.

He was preceded in death by his parents and brothers: Michael Bennight, Marvin Bennight, and James Bennight; and a sister: Melvina Huddleston.

Memorial contributions may be made to the Memorial Nursing Center, 319 E. Josephine, Frederick, OK 73542, in loving memory of Boyd Bennight.

An online guest book and sympathy cards are available at: www.OrrGrayGishfuneralhome.com