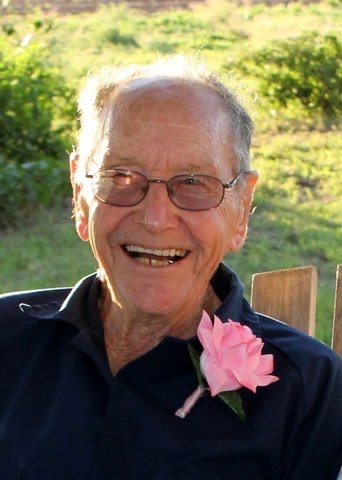 Funeral services for Ernest Leroy Hoover, Jr., 95 of Manitou, were scheduled for 2 p.m., Saturday, Sept. 18, 2021, at the Jackson Funeral Home Chapel with Pastor Grant Hoover and Rev. Kevin Baker officiating.  Burial was set to follow at the Frederick Memorial Cemetery under the direction of Jackson Funeral Home of Frederick.  Mr. Hoover passed away on Wednesday, Sept. 15, 2021, at the Frederick Memorial Nursing Center in Frederick.

Ernest served in World War II as an aid to help soldiers return to their families and homes safely.  Ernest married the love of his life, Elsie Hoover in October of 1948.  She remained close by his side for 69 years and 10 months, when she left her earthly home to be with Jesus. For the last three years, he’s missed her deeply. They are together now, probably sitting on the front porch together or playing dominoes with God. He spent most of his life farming and ranching, though he was also a skilled carpenter around southwest Oklahoma for a time.  He took faithful stewardship over his land and cattle for which he made a living. From childhood to age 90, he could be found out in the garden on his hands and knees, planting potatoes, squash, watermelon, and more. Even just days ago, while in the nursing home, he asked about the farm and the crops Marlin was planting.

Most importantly he was a loving husband, father, and grandfather to many.  He loved each of his children and grandchildren and great-grandchildren very much.  He taught his grandkids how to catch grasshoppers and toads and even converted an old chicken coop into a playhouse for his granddaughters.  All the Hoover cousins remember each summer when Grandpa would clean out an old rusty horse tank and fill it up with water so they could swim in it.  Later in life, when asked if he had any major life regrets, he answered: “Yes. I wish I would’ve moved us to a home with indoor plumbing sooner.”

Deacon of Trinity Baptist Church in Frederick, Ernest loved the Lord and was a devout Christian.   Ernest Hoover was a great man and one who will be deeply missed.

He was preceded in death by his parents, Ernest & Molly Hoover; his wife, Elsie Hoover; one brother, Clarence Hoover; one sister, Dorotha Bartley; a grandson, Ryan Hoover; a great-granddaughter, Kyra Hoover.

Memorials may be made to the First Baptist Church of Frederick in memory of Ernest Hoover.