Partisan vs. Non-Partisan: What’s the difference? 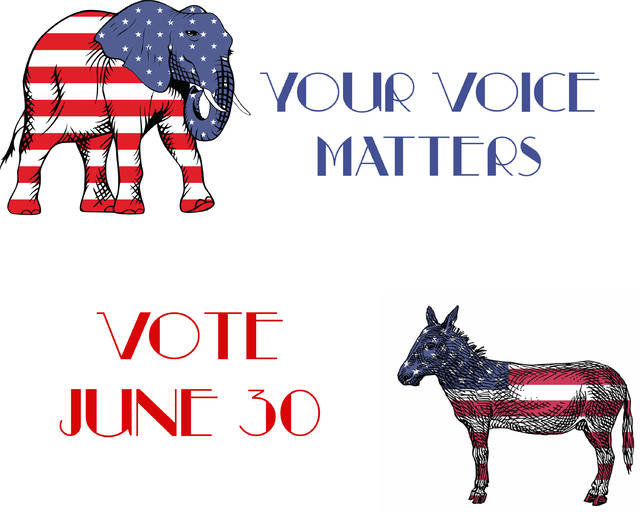 The Republican and Democratic primary elections are scheduled for June 30.
Posted Wednesday, June 24, 2020 7:53 am
By Kathleen Guill
kathleen@press-leader.com

With the upcoming republican primary election, local residents have raised concerns that not every Tillman County resident gets to vote for the Tillman County Sheriff. Both candidates are republicans, so if you’re a registered Democrat, you can’t vote for the county sheriff. The same would be true for Republicans if both candidates were Democrats.

Changing the vote to non-partisan would mean that every registered voter in the county could vote for the office of sheriff.

What is the difference between partisan and non-partisan?

Proponents of non-partisan ballots suggest that political parties are irrelevant to providing services.

The term non-partisan describes elections in which the candidates do not run with partisan labels. Non-partisan elections are generally held for municipal and county offices.

Ray McNair, Executive Director of the Oklahoma Sheriffs’ Association, said that they have been trying to pass legislation to make the sheriffs’ elections non-partisan, meaning that anyone could vote for them, no matter what their political affiliations are.

Tillman County residents have posed questions like, “Why don’t the County Commissioners change the sheriff’s election so that everyone in the county can vote for them?”

According to McNair, that power lies with the state, not local county commissioners.

“That has to be changed by legislative statute,” McNair said. “We’ve been trying to change the statute to allow for sheriffs to be non-partisan for the last 26 years and every time we run the bill at the State Legislature, it’s defeated. The reason why we feel the sheriffs should be non-partisan is that everyone in the county should be able to vote for who they want as their chief law enforcement in the county, be it Republican or be it Democrat. When we answer a 911 call, we don’t ask if you’re Republican or Democrat before we respond. We respond to all calls. We feel everyone in the County should be allowed to vote for the position of sheriff.”

McNair said they plan to re-run their non-partisan sheriff bill again in February. The Oklahoma Sheriff’s Association was successful at getting a 20-year deputy bill passed recently.

“Trying to get a 20-year deputy package was something we’d been doing since the 1950s,” McNair said. “So these guys don’t have to work until they’re 70. We just recently passed that, and it goes into effect in November. That was a big piece of legislation for us because it also includes detention officers, those who work in the jails. We hope it helps recruitment for county law enforcement because a lot of people will start out in law enforcement in the sheriff’s office, and will quit and move to municipal law enforcement because they pay better and they have a better retirement system, so we’re hoping this will keep some of these younger deputies around longer.”

A previous version of the legislation that would make voting for county sheriff states that candidates for county sheriff would file a Declaration of Candidacy with the secretary of the county election board, but would not declare a party affiliation. If more than two candidates qualify to have their names appear on the ballot for the office of county sheriff, the names of all such candidates would appear on a Primary Election ballot, and every registered voter in the county would be able to vote for the office of sheriff.

The Democratic Party has authorized Independent voters to participate in their primary elections in 2020 and 2021.

All voters, regardless of political affiliation, may vote in any non-partisan elections held on the same date as a partisan primary election.

Whether you vote partisan or non-partisan, Democrat, Republican, or Independent, it is important to do your own research into the candidates who will appear on the ballot.

If you would like to see legislation passed that would make law enforcement candidates non-partisan, you can contact Chris Kidd’s office at 405-521-5563 or Trey Caldwell’s office at 405-557-7307 to discuss the issue.

OKLAHOMA! Where the wind comes sweeping down the plains